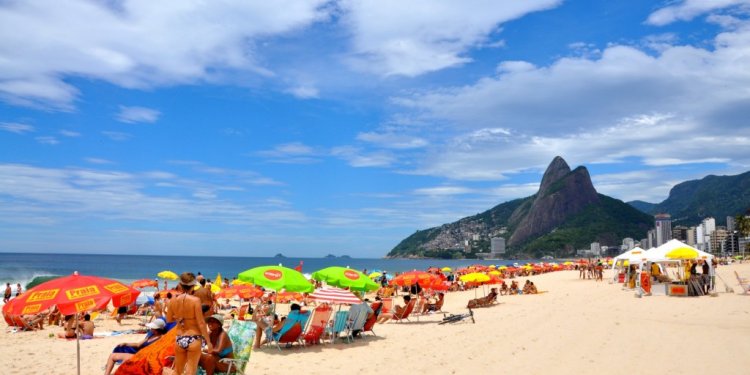 Where to stay and where to find hotel bargains in Rio

An aerial view of the Dois Irmãos mountains and the Vidigal favela. Photograph: Buda Mendes/STF/LatinContent/Getty Images

To be close to the England team (if they qualify), stay in the Copacabana tourist trap. For a more upmarket neighbourhood, head further down the beach to Ipanema or Leblon. If bohemian neighbourhoods and moody bars and bistros are your thing, then you would be better off at a boutique hotel in Santa Teresa. But for the best views at the lowest price and a more vibrant slice of Rio life, find a favela hotel in Vidigal or Tavares Bastos.

How to get around

Book early or be punished. Domestic flights are absurdly expensive in Brazil. Leave it to the last minute and the price of a half-hour hop from Rio de Janeiro to São Paulo can surge two, three or fourfold. The same goes for more exotic destinations in the interior. The alternative – if you have the time to travel like the locals – is to use long-distance buses. In the Amazon, boats are the best option for the leisure of adventure traveller.

Keep you eyes peeled for river dolphins on the way.

What to do between matches

England player Phil Jones taking a picture on his phone as the national squad visited the Christ the Redeemer statue before their friendly match against Brazil earlier this month. You may prefer to avoid the crowds by going further afield. Photograph: The FA via Getty Images

In Rio the tourist trail usually starts with the crowded landmarks of the Christ the Redeemer Statue, Sugar Loaf mountain and the bars and beaches of Copacabana, but for a change of pace and stunning scenery, try day or weekend trips to Búzios, Paraty or Petropolis. São Paulo is less attractive, but a finer temporary nest for visiting culture vultures. The Museum of Art arguably has the best collection in Latin America. More adventurous travellers have some of the world's greatest wilderness and most spectacular landscapes to choose from. For starters, try the Iguazu falls on the border with Argentina, densely forested Itaimbezinho canyons in Rio Grande do Sul, the world's largest wetland (and many other ecosystems) in the Pantanal, the beaches, deserts and fine food of Bahia, and of course the Amazon.

The most common dish is rice, beans and manioc (or cassava), which means vegetarians will never go hungry, though they may have to search for something beyond the staples. Brazil is the land of the cerrado plains, which is beef country. For a feast, try a churrascaria restaurant, which guarantees a stomach-bulging fleshfest. More daring palates should sample the cuisine of Bahia – which has African roots – such as bobó de camerão (a gravy-like shrimp dish served in a clay pot), badejo and vatapá. In São Paulo – with the largest Japanese community outside Japan – the sushi and udon are excellent. For a street snack, try chicken hearts or corn on the cob.

The fate of the Falkland Islands may be a topic to avoid in Brazil. Photograph: Daniel Garcia/AFP/Getty Images

As Ilhas Malvinas devem continuar britânicas para sempre? is a fine gambit if you want to dig up old enmities between Britain and Latin America (though Argentina is a candidate for the least popular nation in the region). The more diplomatically minded might try: Não vamos falar sobre as Malvinas (Let's not talk about the Falklands).

Members of a samba school travel by bus, a cheap way to get around Rio and beyond. Photograph: Antonio Scorza/AFP/Getty Images