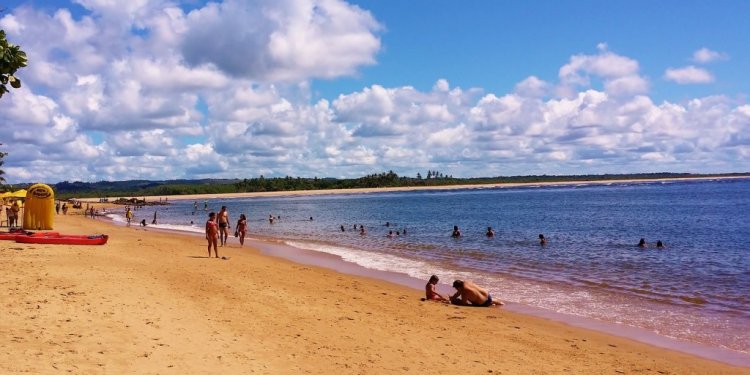 When I think of a vacation in Brazil, my mind immediately springs to the stunning city of Rio de Janeiro, but the truth is that the country has so much more to offer than just a single metropolis. In fact, the southern tip of Brazil is highly popular with the inhabitants of neighboring Latin American countries, boasting many an attraction: both natural and man-made. From incredible waterfalls to historic ruins, there’s something for everyone in this region. Here are 10 incredible destinations in southern Brazil:

Click on the images to enlarge them to full size

Porto Alegre is a city that also doubles up as the state capital of Rio Grande do Sul. The city is located on the banks of the Guaiba estuary, where no less than five rivers empty their contents into an enormous freshwater lagoon. If you’re thinking about vacationing in Porto Alegre be sure to visit the Joaquim José Felizardo Museum, which houses an expansive collection of photographs and archeological artifacts detailing the city’s past.

If you like your vacation destinations to be a bit lively, Balneario Camboriu is definitely somewhere to consider. Its stunning, arcing waterfront is often compared to the famous Copacabana beach, and is lined with high-rise hotels, nightclubs and bars. If you’re taking your young family with you, there’s also plenty for youngsters to do – the city boasts a zoo, aquarium and botanical garden among many other family-friendly attractions.

The picturesque ruins of Sao Miguel das Missoes are what remain of a 17th Century Jesuit mission to the land of the Guaranis. It was one of seven Jesuit missions to Guarani lands undertaken during the 17th and 18th Centuries, in a bid to convert the native peoples to Christianity. The ruins now lie in a historic park, and are protected under Brazilian law. In addition to the ruins themselves, Sao Miguel is renowned for the natural beauty of its surroundings.

Who knew that there’s a bit of Bavaria in Brazil? Blumenau was settled by Germans in the 1800s, and they brought their signature architectural style with them. The city even has an Oktoberfest, and beer-swilling revelers line the streets each October in a time-honored tradition. The historic district of Vila Germanica features quaint half-timbered buildings and plenty of eateries if you happen to enjoy traditional German food.

This national park is Brazil’s very first. Lying between the states of Rio Grande do Sul and Santa Catarina, Aparados da Serra was established to protect the region’s incredible canyons. Walk from the visitor’s center to Itaimbezinho canyon, which is the park’s main attraction, and enjoy amazing views of seasonal waterfalls.

The city is the capital of the state of Parana. It doubles up as a starting point for excursions, as well as being a place totally worthy of exploration in its own right. Green space abounds in Curitiba, and you can get around using the city’s extensive public transportation system. You don’t even have to worry about crossing busy roads – there are large pedestrian-only zones around the city for a completely leisurely experience. There’s also some wonderful historic architecture to see, such as the Old City Hall and the colonial buildings of Largo da Ordem. Last but not least, the city’s iconic Botanical Garden is also a must-see attraction. Wind your way through labyrinth-like French gardens, and visit the Botanical Museum.

Many of us dream of a pristine, sandy beach to soak up the sun on, but finding one that is truly unspoiled is easier said than done these days. Ilha do Mel is located off the coast of the state of Parana, and no cars are allowed on the ecologically-protected island. You can tan, swim and surf to your heart’s content on this beautiful island, as well as visit an 18th Century Portuguese fort or a scenic lighthouse.

This is a town that is arguably the best-preserved representation of colonial life in Brazil. Many of the 18th Century buildings are still intact, especially those along the cobblestone promenade that lines the town’s river. Morretes is also famous for its food, even having its own dish, called barreado. It’s a great idea to visit Curitiba (further up this list) and then make your way to Morretes on a day trip via the Paranagua-Curitiba railway.

The port city of Florianopolis was founded in the 1700s by the Portuguese, and is arguably most well-known for the beautiful resort island of Santa Catarina, which lies within its boundaries. The island has more than 40 sandy beaches, meaning that every type of aquatic activity imaginable is available for you to try out. Another popular destination in the city is the Lagoa da Conceicao. It offers gorgeous views, making it a perfect leisurely stroll. The saltwater lagoon is also lined with the city’s best restaurants and shops.

Located at the point where the Brazilian, Argentinian and Paraguayan borders meet, the breathtaking Iguazu Falls are just a short drive away from the nearest city, Foz do Iguacu. Some 275 to 300 separate waterfalls cascade over steep cliffs in a thunderous roar, making for spectacular viewing. There are also plenty of hiking trails to explore, with beautiful vistas for you to take in. If you happen to be a bit more adventurous, hop on one of the boat rides that take you right underneath some of the falls for an added thrill.