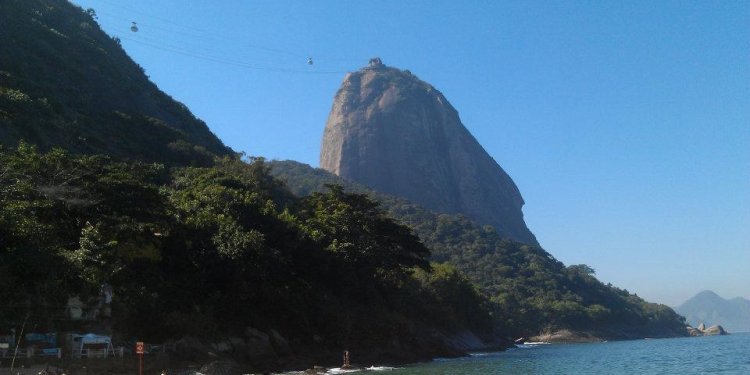 September 7th is Brazilian Independence Day, and we’re in the mood to celebrate. This country is famous for its carnival, caipirinhas and sunshine, but we bet you didn’t know…

Whaaaat? Yeah, it’s true: Alberto Santos-Dumont is a national hero in Brazil, and considered the father of modern aviation – not the Wright Brothers. While the Wrights flew earlier, Santos-Dumont’s fixed-wing aircraft was the first able to take off under its own power, wowing crowds with its inaugural display in Paris on 23 October 1906.

The Wrights’ flight in 1903 used a launching rail to get the plane off the ground, and attempts in 104-05 used a launch catapult. Now, which example do you think resembles modern flight?

A third of the world’s monkeys live in Brazil

Out of 300 known monkey species, 82 are found in Brazil – including Brown Howler monkeys at Iguacu Falls, as pictured above. Monkeys make their home in the 18% of land dedicated to protected national parks, nature reserves and marine areas.

You’ve got to vote

Brazil produces one third of the world’s coffee

3.3 billion pounds of coffee is produced in Brazil every year according to a 2012 Fairtrade report, amounting to about a third of the world’s coffee. Arabica and robusta beans make up the bulk of the product, which is grown in south-eastern states Minas Gerais, São Paulo and Paraná.

You’re likely to meet a few Mr or Ms Silvas on your trip to Brazil. A typical Portuguese surname, its proliferation has a darker history: Silva was a name typically given to slaves during Portugal’s occupation of the country (1500-1815).

The longest traffic jam ever was in Sao Paulo

On 10th June 2009, more than 182 miles of traffic jams were reported on 522 roads in Sao Paulo. When you look at Brazil’s auto figures, it shows what’s up: around 1000 new vehicles hit the road daily, and drivers can on average expect up to four hours of delays on their journey. Typical rush-hour jams in Sao Paulo can be 50 miles long – that’s a lot of horn-honking.

Brazil is the only country named after a tree

Brazil is so-called after the indigenous brazilwood tree. After Portuguese settlement on the land in 1500, brazilwood trees were harvested for a red-coloured dye which was shipped for use in Europe. Calling the country ‘Brazil’ followed the Portuguese habit of referring to distant and newly-discovered lands by their commercial product, rather than their ‘given’ name (which in this case was Terra de Santa Cruz – “Land of the Holy Cross”). The use of “Santa Cruz” naturally faded and Brazil became the country name.

Brazil’s played in every World Cup

What are some tips for a Brazilian citizen applying for a USA tourist visa? - Quora

The most important thing is to prove that you have ties with Brazil: a house or a car, a spouse, kids, a stable job or a business in Brazil. I don't think it's relevant to mention what exactly you are going to do in the US if you're applying for a tourist visa, but if you're applying for a business visa, it might help if you explain why you need to open a bank account there.
Bring your "declaração de imposto de renda" (tax papers) and all the documentation necessary to prove whatever you tell them.
I'm not a specialist, but I've been through the process a few times, and that's basically w…