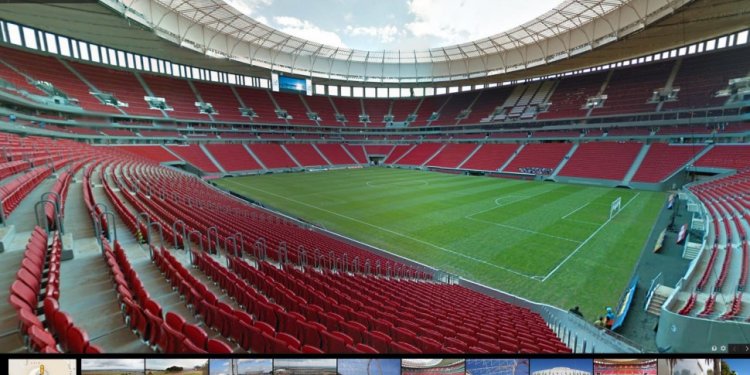 Brazil is located in South America. Brazil is bordered by the Atlantic Ocean, French Guiana, Suriname, Guyana, Venezuela, and Colombia to the north, Peru, Bolivia, Paraguay, and Argentina to the east, and Uruguay to the south. Google Earth is a free program from Google that allows you to explore satellite images showing the cities and landscapes of Brazil and all of South America in fantastic detail. It works on your desktop computer, tablet, or mobile phone. The images in many areas are detailed enough that you can see houses, vehicles and even people on a city street. Google Earth is free and easy-to-use. Brazil is one of nearly 200 countries illustrated on our Blue Ocean Laminated Map of the World. This map shows a combination of political and physical features. It includes country boundaries, major cities, major mountains in shaded relief, ocean depth in blue color gradient, along with many other features.

This is a great map for students, schools, offices and anywhere that a nice map of the world is needed for education, display or decor. If you are interested in Brazil and the geography of South America our large laminated map of South America might be just what you need. It is a large political map of South America that also shows many of the continent's physical features in color or shaded relief. Major lakes, rivers, cities, roads, country boundaries, coastlines and surrounding islands are all shown on the map.

Brazil has a wealth of metal resources which include bauxite, gold, iron ore, manganese, nickel, platinum and tin. Other resources include gemstones, phosphates, uranium, petroleum, hydropower and timber.

In the northeastern part of Brazil there are recurring droughts. Other natural hazards include floods, and occasional frost in the southern portion of the country.

The country of Brazil has water, air and soil pollution. The deforestation in the Amazon Basin destroys the habitat and endangers a multitude of plant and animal species indigenous to the area. There is wetland degradation, severe oil spills, and water pollution and land degradation caused by improper mining activities. Rio de Janeiro, Sao Paulo, and several other large cities have air and water pollution. This country also experiences a lucrative illegal wildlife trade. Copyright information: The images on this page were composed by Angela King and Brad Cole and are copyright by Geology.com © 2008. These images are not available for use beyond our websites. If you would like to share them with others please link to this page. The satellite image was produced using Landsat data from NASA and the map was produced using data licensed from and copyright by Map Resources © 2008.
Source: geology.com