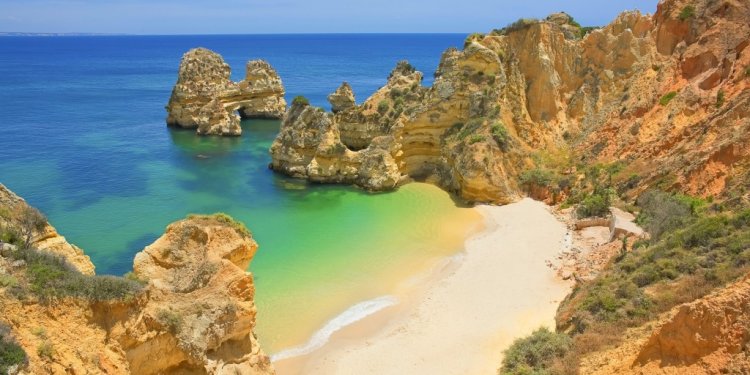 Looming large over the city center, Guimarães Castle is one of the most complete and best-preserved medieval strongholds in Portugal. Dating from the 10th century, its enormous square keep and the eight crenelated towers that surround it remain a familiar and much cherished landmark. The castle is believed to be the birthplace in 1110 of Portugal's first king, Afonso Henriques, and as such is regarded by many as a national shrine; the much-visited font where he was baptized is kept in the Romanesque chapel of São Miguel, tucked into the western end of the castle. Mass is celebrated here annually on the king's birthday to commemorate the event. The aforementioned keep - known as the Torre de Menagem - reputedly housed an 11th-century Benedictine convent founded by the Countess Mumadona. Visitors can walk the heavy curtain walls and scale the narrow steps to the top of the tower where fine views of the city and the countryside can be admired

Standing at the foot of the castle hill is the Palace of the Dukes of Bragança. Begun in 1401 on the orders of Dom Afonso, the first Duke of Bragança, this magnificent royal residence follows a Burgundian style of architecture in deference to Dom Afonso's taste for all things French. The palace was completed in 1442, but fell into disuse after the seat of the Bragança family was transferred in the early 16th century to Vila Viçosa. In 1933, the building underwent extensive renovation to become the official presidential residence during António Salazar's dictatorship. A sightseeing tour of the palace takes in most of the rooms and their 16h-century furniture and includes a visit to a small museum where Persian rugs, Flemish tapestries, medieval weaponry, and a collection of rare paintings are displayed. The chapel is noted for its vivid stained-glass windows. About 200 kilometers from Guimarães lies the town of Bragança, the original seat of the House of Bragança, which ruled in Portugal from 1640 to 1910.

Enjoying a fabulous film-set location within the serene Romanesque cloister of Nossa Senhora da Oliveira, the Alberto Sampaio Museum was created to showcase the religious artworks belonging to the convent and other churches throughout the Guimarães region. The depository of ecclesiastical treasures spans the 14th to the 18th centuries and includes an impressive collection of medieval and Renaissance-era sculpture, paintings, and ceramics; embroidered vestments; an outstanding array of rare jewelry; and items such as processional crosses and gold and silver chalices. The Santa Clara room is an Aladdin's den of gilt carving. Central to the permanent exhibition is the magnificent 14th-century gilded silver altarpiece and the tunic worn by João I at the battle of Aljubarrota in 1385.

With its picture-postcard looks and venerable atmosphere, Largo da Oliveira exudes a genuine medieval aspect. Surrounded by time worn cobbled streets and heavy-set granite facades, the ancient square is the historic hub of old Guimarães. Some of the town's most recognized tourist attractions are set within the square's handsome arcades. One, the Igreja de Nossa Senhora da Oliveira, dominates the location. This former monastery, founded by Afonso Henriques in the 12th century, stands on the site of an earlier convent built 200 years earlier. Much of the original structure was demolished, and the church as it appears today is largely 16th century - the Manueline bell tower was added in the early 1500s. The tranquil cloister houses the Museu de Alberto Sampaio. In front of the church is the Padrão do Salado, a 14th-century Gothic shrine shielding a cross. The monument is said to mark the spot where an olive tree was transplanted in the 13th century to supply the altar lamp with oil.

Enthusiasts of archaeology are in for a treat at the Martins Sarmento Museum. It's no coincidence that the facility is named after the man who excavated Citânia de Briteiros in 1875 - one of the most impressive archaeological sites in Portugal. The museum is imaginatively housed within the cloister of the 14th-century convent of São Domingos, and the Gothic setting lends a mysterious and strangely romantic quality to the collection. The bulk of the exhibition is made up of Celtiberian artifacts unearthed at prehistoric Citânia de Briteiros and Castro de Sabroso, but also included are a host of finds from other northern Portuguese Iron Age sites. Actually, some of these date from the Stone Age and placed together offer the visitor a fascinating glimpse into the region's Palaeolithic and Neolithic past.

Situated away from the old town center, the graceful convent and church of São Francisco is celebrated for the 18th-century azulejos that adorn the chancel. The tiles depict the life of St. Anthony in a series of vivid blue and white panels that flow in style and harmony with the Gothic dome of the main chapel. The church foundations date from 1400, but the building underwent considerable reconstruction in the 1740s. Besides the tilework, visitors should look out for the splendid engravings that decorate the nave, the wooden roof of which displays a wonderful example of trompe l'oeil painting. Other notable features include the large arc of gilded woodwork that separates the chancel from the Gothic transept, and the double-tiered cloister.

Where is Porto in Portugal?